Some of the Best House Edges 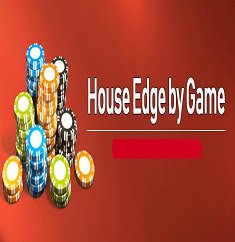 Every casino game has a house edge, but some are bigger than others. Here's a quick rundown of how they stack up for some of the most popular offerings you'll find online.

House Edges are not Set in Stone

One important thing to know is that for every single game there's variance. This is probably most obvious with slots, which have different special features or number of reels. Even something like roulette can vary (depending on whether there's a double zero or a single zero). Because of this, be aware that the numbers below can only be an approximate guide as things differ from one rule set to the next.

The RTP (return to player) is usually pretty good, and can vary quite a bit, but it's not uncommon to find figures of around 96-97% (an edge of 3-4%). One thing to be aware of is that games with very large jackpots (the classic being a progressive jackpot juggernaut like Mega Moolah) can have a significantly higher edge. Of course, if you win the jackpot that could be millions of dollars, so it's a case of whether you prefer a higher chance of a smaller profit, or a shot at a life-changing sum of money. 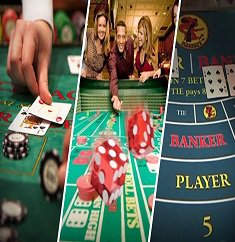 If the best chance of finishing ahead is your main concern then the game for you is blackjack. Play with a single deck if the option's there because with smart play this only gives the house an advantage as low as 0.5%. This makes it almost certainly the best you'll find.

Roulette has the downside of being randomized so smart play doesn't figure. With a single zero, the edge is actually a bit better than you might think, just 2.5%. But with double zero this increases to over 5%. If you have the choice, choose a single zero.

Craps is popular and exciting but complex. The various potential bets have differing edges, but the pass/don't pass bets have an edge of around 1.5%. Different bets make it less likely for the player to finish ahead.

Beloved by James Bond, baccarat has a casino advantage just over 1%, making it comparable to blackjack for the best deal in the casino.

Poker is difficult to quantify because there are so many variations. Video poker can favor the house from 0.5% to 5%, whilst three-card has a house edge of around 1.5%. Once again, the skill aspect means smart play can improve your chances.

The house necessarily has the advantage (it's a business, after all), but sometimes it's not huge. Keep cool and you can get ahead.